Tampering with medical records is much more often the act of a healthcare professional desperate to hide the facts of a case. In a bizarre twist, Brooks Ayers falsified cancer records from a facility that never treated him.

For people like me who do not watch TV, Brooks Ayers is a guy who is on a reality show called Real Housewives of Orange County. Apparently he does have cancer (stage III non-Hodgkins lymphoma), and when accused of lying about the diagnosis, he offered medical records and bills to prove.

Mr. Ayers selected City of Hope Medical Center as the site where he claimed he received treatment, according to news reports from Eonline.com. Careful inspection of his documents, when compared with the records of real patients, showed discrepancies in these features:

In November 2015, Mr. Ayers admitted falsifying medical records, and recently explained to People Magazine that he did so because appearing on the show made him the subject of much ridicule and hate. He created these records, he says, to avoid showing his real records to prove he has cancer.

Let me be clear. I had not heard of Mr. Ayers until People provided me with this story in my email in box. I feel sorry for him. Not only does he have cancer, if we accept that to be true, but now he has been exposed as a person who lies, and apparently went to some trouble to create fictitious records.

I have long been fascinated with the attempts of healthcare professionals to cover up information, or to “set the record straight” after an untoward incident. It is, however, so easy to get caught. Mr. Ayers should have anticipated that a careful news reporter would check his sources, and that people who were treated or working at City of Hope would recognize all of the inconsistencies.

There is really no place to hide when you try to falsify medical records. Healthcare providers think they are clever when they alter records, and I am sure many such forgeries and alterations are not detected. If a patient’s records are not examined by a plaintiff attorney, or the Board of Medical Examiners does not take action against a physician, these records sit quietly hiding their secrets.

The astute legal nurse consultant considers the possibility of altered medical records when the little pieces of the puzzle do not add up. The discrepancies in the versions of events, the two sets of medical records that don’t match, the credible plaintiff who has a very strong recollection or notes about what he or she told the provider…all are traps for the clever healthcare provider. 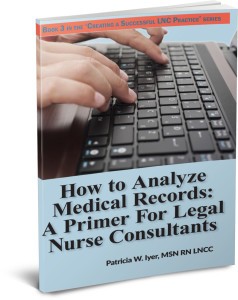 Forging medical records is an act of desperation, and has lots of consequences. I am sure providers who get caught regret their forgeries. I am sure Mr. Ayers regrets what he did.

Pat Iyer MSN RN LNCC is the author of a new 2016 book which includes a chapter on how to detect tampering with medical records. Get it here.