You are here: Home / Blog / Courtroom Battle: My Worst Day in Court as an Expert Witness The defense attorney stomped into the courtroom, radiating nervous energy and anger. She dropped a copy of my Nursing Malpractice text onto her counsel table. When I looked at her, I knew that as the plaintiff’s nursing expert, I was in for an expert witness courtroom battle.

My client had asked me to testify on behalf of a man who was injured by an intramuscular injection in his buttock. He developed a foot drop. He testified he felt an immediate pain that ran down his leg. There was nothing in the medical record that substantiated these symptoms.

My direct examination went smoothly and then I braced myself for the cross examination. In her short skirt and high heels, the defense attorney stalked over to the witness box and began her cross. She was quick in her questioning and eager to pounce. We sparred until she got to these questions, which went along these lines:

At this point, my client might have been objected to the continuing line of questions. I should have stuck to my guns and replied, “I do not know.” Instead, I made a big mistake and answered, “Sometimes when there is a bad outcome there is a cover up.” 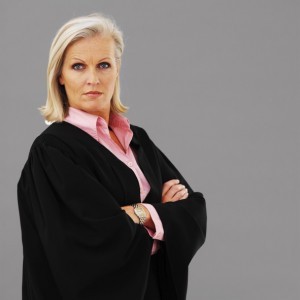 I want a mistrial!

Oh, bad move! The judge, who had been mild up to this point, leaned over her area and breathed fire and smoke: “Nurse Iyer, you know better than to say that. You’ve been in my courtroom before.” She paused and every eye in the courtroom was on me. I willed the floor to open up and deposit me one floor down. The defense attorney asked for a mistrial.

The courtroom battle continued after the judge took a break, and then returned to the courtroom to tell the jury to disregard what I had said. “It is true that there are sometimes cover ups after bad outcomes, but we do not have evidence it occurred here.” The defense attorney was even angrier by this remark and asked for a mistrial again. The judge brushed the request aside.

My cross examination continued. The attorney took my Nursing Malpractice book off the table and opened it up to the preface. She said, “Isn’t it true you wrote this book for plaintiff attorneys?” (She spat out the words “plaintiff attorneys.”)

Since I have been trained to always request to see what the attorney is referring to when quoting my words, I took the book from her hands and said, “It says, ”This book is written for plaintiff attorneys, defense attorneys, risk manager and insurance claims adjusters.” The defense attorney asked for a mistrial again because I used the word “insurance”. The judge denied her request.

The attorney finally said the wonderful words, “That is all.” My courtroom battle was over.

My client was gracious when I apologized for causing so much trouble. I learned some valuable lessons.

1. When asked the same question over and over, simply stick to the same answer.
2. Do not attempt to speculate as to why people did what they did. I should have simply said, “I don’t know why the doctor did not chart the complaints.”
3. You can’t expect to anticipate how your words will be used. I have written extensively and never dreamt the preface to that book could be twisted into something negative.
4. The jurors were probably not offended by the “lowest common denominator.” An acquaintance of mine who is an attorney said, “Pat, don’t worry. The lowest common denominator on that juror did not know what the phrase meant.”

My client lost the case and was not able to appeal the decision. He said the only good part of the experience is that the judge disliked him so much that she forbid him from trying a case in front of her again. He was overjoyed with not having to face her again. This was a win for him! And a somewhat happy ending to my courtroom battle.

Pat Iyer is the former president of Med League, an independent legal nurse consulting business she founded and grew for 28 years. She testified as a liability expert for 20 years. Get the book that caused me trouble here: Nursing Malpractice Fourth Edition.