You might think that fear is the legal nurse consultant’s enemy. Fear demoralizes us, right? It stops us in our tracks. Not so. How should you be dealing with fear?

Understand that even if we’re in situations that lack fulfillment or the flexible lifestyle we think we want, it is human nature to want to maintain the status quo by staying where we are. Our tendency is to prefer the known.

Fear is a natural part of the process of change.

Fear creates growing pains rather than an obstacle to moving forward.

Sometimes people get the fear of making changes confused with the type of fear we might experience if we’re walking down a dark alley at night in the bad part of town. That type of fear, which is more a gut-level survival fear, gets our adrenaline pumping and heightens our senses so we can protect ourselves.

The fear we experience when we’re trying something new, making a change, and breaking out on our own is intended to make us more aware and alert so we can do the best we can moving forward.

• Feel the fear.
• Face it.
• Move forward.
• Grow until the next challenge comes along.

As someone who has faced recurrent fear in my own business, I appreciate this analysis. There’s a risk that a person can become paralyzed with fear and stay stuck in a very undesirable situation because of not knowing what might be ahead. Yet, without making those changes, there’s no way out of that difficult situation.

During the 2008 recession, my LNC business experienced a drop in cases and cash flow. In August 2008, I could not take a salary, which was the first time that ever happened. The company consisted of me and 2 support staff members who had each been with the company for 12 years. Although for the previous 2 years I was able to give my 2 support staff an extra paycheck as a bonus at Christmas, I realized I could not afford to do that in 2008.

My staff members had counted on that extra paycheck and were greatly demoralized when it did not appear.

They did not respond to my efforts to encourage them to take the long view and work together as a team to address the drop in business. They remained hostile and angry from the moment I announced there would be no bonus (in early November 2008) through January 2009. There was no end in sight. I was fearful of making a change, but miserable in my business.

One day I realized that I needed to take charge of the situation and had to be more proactive in dealing with fear.

I realized I had a choice of who I worked with. It was my business.

I made the difficult decision to replace one of them with an in-house LNC in January 2009. The in-house LNC was not well suited for the position and resigned a few months later. I replaced her with a secretary who was a terrific employee and who loved her job.

The remaining long term support staff employee resigned her position in September 2009 at the worst possible time in my life when my husband was about to undergo a triple bypass. After trying a new person in the position, I eventually hired an employee who was very competent and a joy to work with.

One of the hardest part of this time in my business was addressing the fear of what would happen to the business if both of these key long time employees left. To my delight, the atmosphere changed from people who were angry and hard to work with to people who were great to work with.

Dealing with fear resulted in a business that flourished as I surrounded myself with people who liked their jobs and each other. What are your fears? 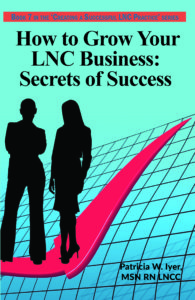 This blog is extracted from one of my newest 2017 books: How to Grow Your LNC Business: Secrets of Success. Get practical tips for stabilizing and expanding your LNC business. Purchase your copy at this link.